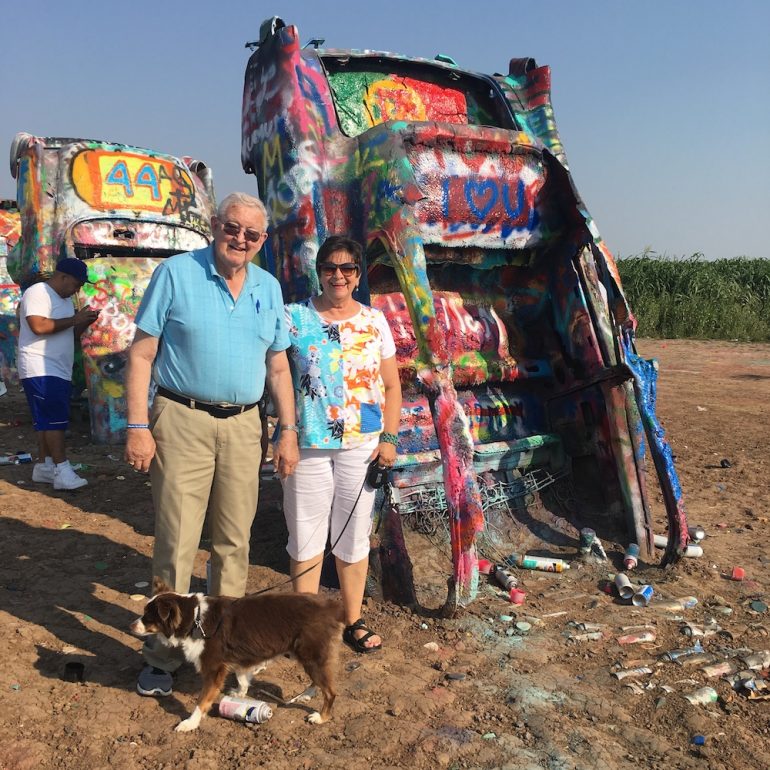 Strolling down Memory Lane. With my parents.

4 years ago no comments

My father was a mail carrier and my mother went to college when she was 16. These were just two of the many things I learned when we took my parents on a nostalgic trip down History Lane.

We had made the trip to Amarillo Texas, to see where they spent most of their younger years – my parents are in their early 80’s – up to the point when they took my sister and me and moved to Kansas. We visited where my mom went to junior high, and where they both went to high school – which is now part of a college since the high school burned several years ago.

My mother walked herself to a city bus stop at 11 years old, riding and changing buses to arrive at Junior High and High School. Many nights after her volleyball matches, she rode the same city bus system back – in the dark, with no chaperone.

My dad worked afternoons at a gas station, bought an old car and used to take my mother for Sunday drives over to New Mexico (breaking the law for transporting a minor across state lines).

We saw the home of my grandmother and the house my mother grew up in, as well as the house they brought me home from the hospital after birth. The hospital I was born in is still operating as some sort of creepy, guarded lock-up facility.

As we traveled around various parts of the city, my mother and father shared lots of old memories of places they went to hang out, attended church, and even the old motel where they spent their wedding night.

They told us the story of leaving Amarillo to attend college in Abilene Texas, but left after one semester because the college would not allow black students to enroll. Even though they hadn’t been raised by progressive thinking people, my parents instinctively felt the unfairness of this and left. My parents the activists (in 1951) .

We talked into the evening about their lives, their parents’ lives and jobs, and how my father had a calling to preach to Gospel. They left Amarillo to serve a church in Kansas and 3 years later moved to eastern New Mexico, where they have lived, worked and served for the past 57 years.

In this age of mobility, my parents were born and lived in a very small geographic area, and created a history and ancestry that my children and grandchildren will continue to learn about well beyond their lives.

To finish our trip we went total tourist – drove out to Cadillac Ranch where Dad was adventurous enough to walk the 1/4 mile out into a corn field to see cars (mostly from the 1950s and 1960s) sticking out of the ground, covered in spray paint graffiti.

He wasn’t impressed. So we took him to see some better preserved Caddies instead!