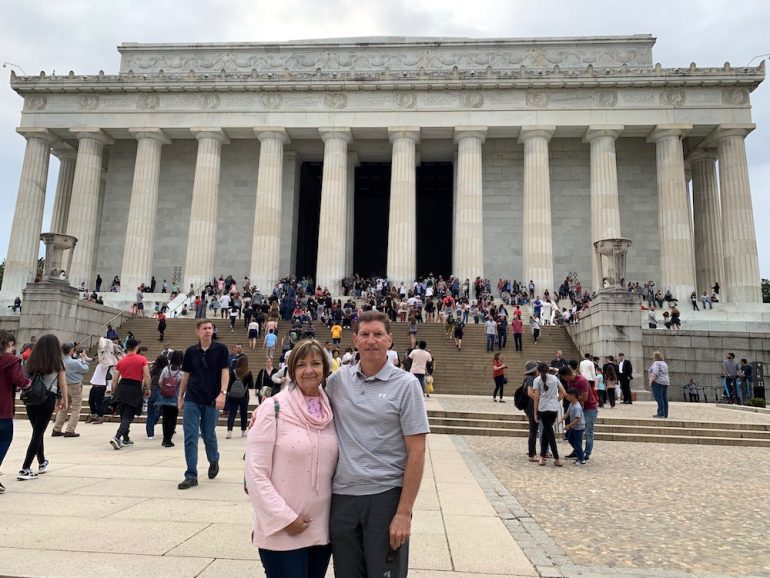 We walked the Mall. And a bunch of other places too.

Recently, we visited rural Virginia and some of Marc’s family, and also took a weekend to go into Washington DC to see our niece.

We had such a great time in DC with Autumn and her beau, Dave. We walked a lot and ate a lot!

We rode the Metro into DC, after driving more than 45 minutes to the outer train station. The Metro ride was also about 45 minutes, and we let Autumn know we made it. We then walked a couple of blocks to a coffee shop that she and Dave were going to meet us at – and had coffee!

Then we walk several more blocks so we could have a brunch meal at one of their favorite local hangouts, the Unconventional Diner. The food was good, and a bit unusual – Dave and I both had some kind of brisket and rice with vegetables, Marc had eggs Benedict, made with biscuits, and Autumn had posole.

We walked several more blocks to her apartment so we could see it and drop off our overnight bags, as we were staying with her for one night (because it was too far to go back and forth).  Dave had gone back to his place to do some work.

After dropping our bags, we walked a lot more blocks (a pattern is emerging), so we could go to the Smithsonian Portrait Art Gallery. Wow, it was impressive. This is where the official portraits of all the presidents, as well as many other significant people, hang throughout the 3-story gallery.

It was amazing that so many of the old portraits of the early presidents were still in very good condition. It was busy but very nice to see. In addition, there was an atrium in the center of the building, where there are a cafe, courtyard and a display of orchids like I had never seen before!  Lots of pictures taken here (also, a pattern is emerging). The building that houses the Portrait Gallery was the original Patent office when the government was initially formed.

After the visit to the Gallery, we caught an Uber (Aaah, a rest for the feet) and drove about 20 minutes to the National Arboretum, the public garden of the US Dept of Agriculture. Autumn said it would be beautiful and it was. Much too large to walk the entire gardens (it is more than 400 acres), we focused on the Bonsai tree collection (amazing!), the National Capital Columns, and the Azalea collection.

The bonsai trees were works of art – I always thought of bonsai trees as one specific type of miniature tree, but they are actually done with many different varieties of trees. And they live for a very long time. The shapes were very unique and delicate – but it was Bee season and the biggest bees I’ve ever seen were buzzing all around the exhibit! So glad we didn’t get bit!

We walked to the Capitol Columns display, where there are 22 columns that were once a part of the US Capitol building now stand as a display. Very stately and impressive and the details!

We were a couple of weeks early for the Azaleas but walked through several gardens there enjoying the landscape. Then we wandered back the National Herb Garden. This garden holds hundreds of kinds of herbs from cooking, healing and heritage varieties. Definitely worth the visit!

We decided an afternoon snack was in order, so we walked until we found a place to stop.  Re-energized, we ‘ubered’ back to the City, and went to the Lincoln Memorial and Autumn told us some insider info about the Lincoln statue. We walked from there to the Vietnam War Memorial Wall and the World War II Monument, both very humbling and impressive.

We had been to the Lincoln and Vietnam, but not to the newer World War II monument. It is always very awe-inspiring to see these monuments up close and very ‘touchable.’  We also saw several statues, including one designed by a woman from New Mexico, which Autumn said the Senator had a replica on his desk when she worked for him.

We had intended to meet Dave at a restaurant in the new ‘Wharf’ area of DC, but he called and said we could get into an Indian restaurant that Autumn loved, so we hustled over to meet him. The Rasika Restaurant was a lovely place, and the food was delicious. She raved about how this restaurant was one of the first times she had ventured out of her comfort zone by trying new types of food and just loved it! So we were fortunate to get in, as it is usually a 2-month wait for it!

The evening was delightful – getting to know Dave better and enjoying our adult niece in her town. She has lived in the DC area for 13 years now and feels like it is very much her home. She loves living right downtown, within ‘walking’ distance of lots of action and activities. Again we walked a while, but we were grateful for the time to let our very full stomachs settle!

We parted ways with Dave and went back to her apartment where we collapsed from the 22,000 steps my tracker said we had completed!

Sunday morning, after a quick trip to the grocery for some weekly items, Autumn took our photo in front of the locally famous ‘watermelon wall,’ which apparently lots of locals know about, and is a landmark point for finding her area of town. We walked to a bakery and had coffee and pastries while just chatting and catching up on life!

After more walking, we stopped for another latte and headed over to Dave’s soccer game. He plays in a city recreational league, and we watched him for a bit before walking to a local German beer garden to await the team’s arrival. A usual after-game stop, many of his friends and fellow players came over and we had brunch and more conversations.

Dave headed back to his place, and we walked back toward the White House and stopped at the Renwick Gallery, another Smithsonian art gallery.

We walked over to the White House area to see and get obligatory tourist photos, and about the time we arrived the Secret Service began shouting for everyone on the plaza area to leave immediately – and there were several hundred people there. They continue to shout and demand we move back for one block, so we decided that was our cue to head out and find some ice cream!   Our steps were adding up again and we wound up with about 20,000 on Sunday!

That morning, Dave said he wanted to take us to his favorite restaurant if we could get in. This was an authentic middle-eastern establishment, and he had spent 3 years working in Iraq and Afghanistan, He knew the food would be good, and the atmosphere very different than we had experienced, so we were ready!

What an experience! The whole place was almost indescribable – from the decor and the open pit fire the chef was using to the spicy and sweet sauces and bread to dip into it. He guided us the whole way in what dishes we would be tasting and what was the significance of them. It was an evening to remember for sure!!

We parted ways and went to the Metro station and started the late night trek to get back to Virginia, where our motorhome was parked.

It was a whirlwind trip and worth every minute! and all those steps…