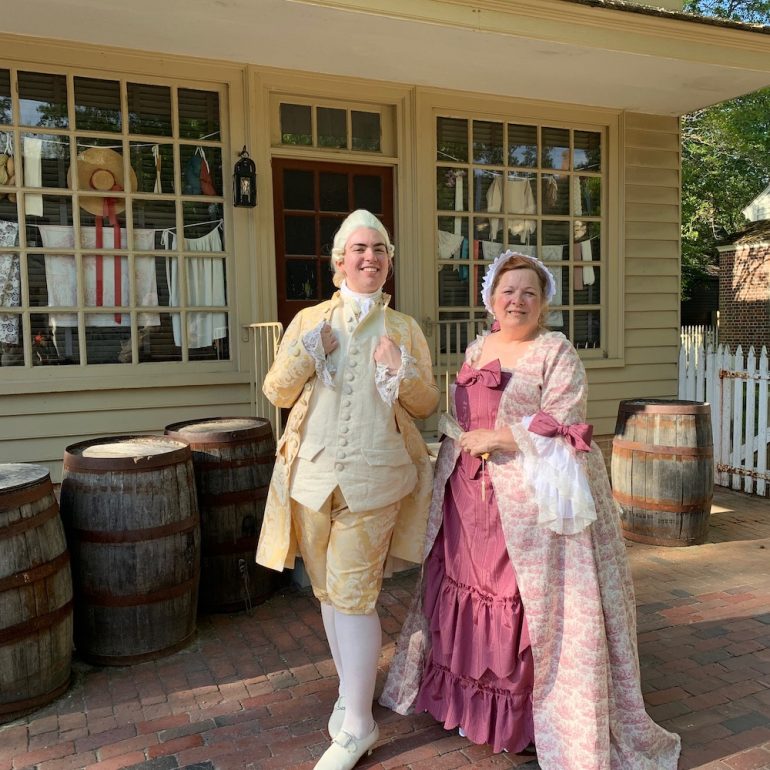 It could be the cheesiest tourist trap in the world. Or the Disneyland of American history.

It really is an amazing living history museum that is an entire town, recreating what history shows was one of the most influential communities of the early pre-United States of America.

Colonial Williamsburg, Virginia, is a chance to experience almost 400 years of history, played out by very talented people and attention to detail in the buildings and shops.

Sure, there are the usual ‘shops’ to purchase tourist chotchkies, but many others are demonstrating the life that colonists had, from making clothes to printing, to even a coffee and tea house and taverns.

We had a delightful time, attending the day with family members who had visited many other times and knew the ins and outs of visiting various buildings.

The historic houses have been rebuilt after excavation and continue to work on even more buildings now. There is a recreated Virginia State Capitol building (the old one burned down), and the attention to detail is shown in the building, as well as the historians that accompany you through the buildings, reciting the little-known facts about a time when the USA was not even formed, but rather Virginia was a colony of the United Kingdom of Britain.

Even before it was a colony, the area was occupied by people who came to a new world to start a new life.

We visited twice while staying in the area, and on our return trip we were surprised by several people dressed in costume who were on their way to a “Ball” which in fact was a fundraising event for the Foundation. It was fun to see all the ‘regular’ folks dressed in costume!

We would recommend Williamsburg – we learned so much about the history of our country before it was such a place! It is worth the money and time to visit! Our family says Christmas is a beautiful and special time to attend, as they deck out the houses and stores with period-specific decorations.

The College of William and Mary, one of the oldest in the US, is at one end of Main Street, and boast a large number of buildings that are 300 years old.